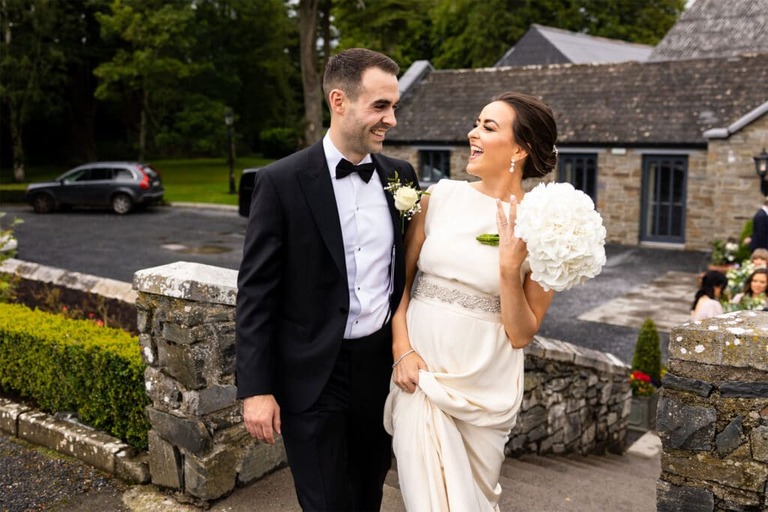 Vicky & Conor had me as their Kilkea Castle Wedding Photographer just as Covid-19 restrictions were being lifted for weddings. These two have been together forever, like, met in secondary school and have been together ever since forever. So when it came to their wedding they wanted a fun day that celebrated the official joining of their two families.

Getting ready at Kilkea Castle

Vicky & her bridal party got ready in one of the houses on site which kept things super easy for them. They arrived the night before and with everything unpacked they hit the prosecco. Vicky’s nanny, who made her wedding dress, kept everyone entertained, singing songs, cracking jokes and just generally being good craic. The boys were ahead of the game, by the time I arrived they were fully dressed and waiting in the ceremony space. Keen much?

If you’re getting married at Kilkea Castle you have a couple of options for your wedding ceremony. Vicky & Conor’s wedding day was windy, and wet so they opted to keep it indoors. The ceremony space in Kilkea is modern with an Art Deco styling which is really beautiful and enables couples to put their own stamp on it but is also gorgeous on its own. For their ceremony, Vicky & Conor chose a handfasting ceremony but also a bottle ceremony, which Vicky closed with a hammer and nails. Not to be opened unless it’s extreme circumstances.

We were spoiled for choice of photo locations at Kilkea Castle. We started with a quick shoot for the bridal party out front, to get them back to mingling and partying quick smart. The wind had picked up at this stage so we trotted down to the walled garden for some shelter and down by the river for some romantic shots of the two of them. I honestly could have shot them all day but they had no interest in spending too long on portraits so it was 10 mins max and back to the party.