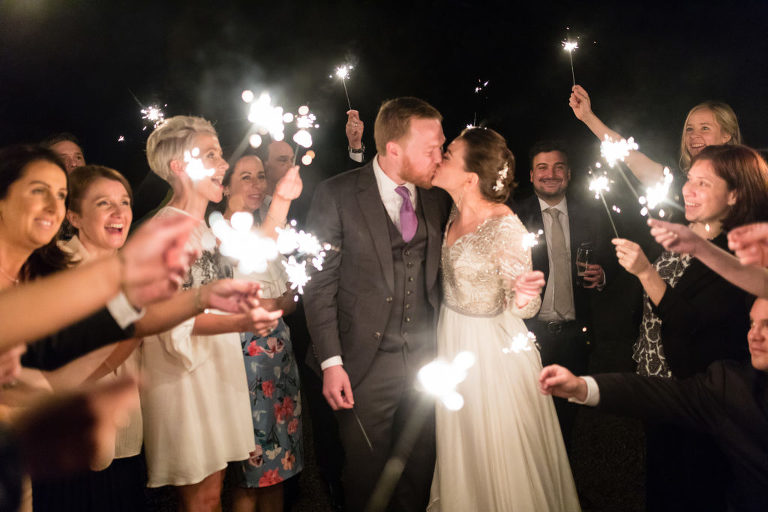 They met, almost colliding in an East Village dive that was far too crowded for a first date. So Kat suggested an ever-so-fancy cocktail bar nearby. And so the night proceeded with more immaculately crafted cocktails than either of them expected. As they talked, they learned that they had an uncanny number of things in common. Playing the flute. Mothers from other countries. Expired EU passports that needed renewing. A love of vinegar. It was a perfect first date and it ended with a sweet, electric kiss by the entrance to the 1st Avenue L stop. Dromquinna Manor Wedding Irish Wedding Photographer

Two joyous, fun-filled years later, Stefan knew. He got a ring in January, guessing at the size and style so that he could surprise Kat.  On the morning of Valentine’s Day, a month or so later and exactly two years and two days after their first date, Kat got up early and made them BLTs. She gave him a card that expressed her love for him and her appreciation and gratitude for the things he did for her, large and small. His heart was as filled with love as his tummy was filled with bacon. Stefan thought to himself, “Today is the day. It’s Valentine’s Day. It is the last day anyone would expect.” There were many things to do. It was a workday, but he managed to get the day’s necessary work done by noon. He went shopping for the romantic dinner he was going to cook at home to avoid the crazy Valentine’s day crush at restaurants.  And so it was that Stefan found himself asking Kat’s parents and her sister if it would be ok with them if he asked their daughter/sister to marry him. They said yes. Dromquinna Manor Wedding Irish Wedding Photographer

While he was cooking dinner, Stefan suggested, “hey, since it’s Valentine’s Day, how about we dress up a little and light some candles, you know, to make it a bit of a romantic dinner date?”. Kat took the chance to try out a rented dress that she wasn’t too sure about. She felt that it made her look a bit like she was in Riverdance. So, they ate, drank, chatted and had a lovely time, while she was dressed as an Irish dancer.

After dinner, Stefan gave Kat a card. She read it and looked a bit strangely at it. The front read, “I want to grow old with you” with a cute drawing of an old couple sitting on a park bench. When Stefan got down on one knee while she was re-reading the card, she was even more confused. Until he started speaking, and it gradually dawned on her what was happening. Neither of them remembers the exact words he spoke, down on one knee, a bit awkwardly close to her, looking up at her surprised, beautiful face. But her response is easy to remember: “yes,” spoken though tears of happiness, surprise, and joy. Dromquinna Manor Wedding Irish Wedding Photographer

And so it was these two lovebirds began planning their Dromquinna Manor wedding the following year. The planning was not without its mishaps. Most notably the church they intended to marry in going on fire just days before the wedding. It was gonna take more than that to knock these two of course. They found a replacement church. A smaller more intimate venue but they made it work.  They planned a 3-day event in Kenmare: a night at Florry Batts Pub with trad music and surprise Irish dancers to welcome them the Irish way. Followed by the “big day”. Once people came back to life on Sunday, everyone took the scenic route through Killarney National Park to Killarney for an evening of more craic and ceol at J.M. Reidy’s. Dromquinna Manor Wedding Irish Wedding Photographer

When I asked Kat “What advice would you give to brides and grooms planning their day?”. Her response was classic Kat. “Eat breakfast! Aside from making for some fairly relaxed family photos, you’ll be glad later on to have eaten something before the champagne begins to flow. Better still, delegate the breakfast-making to someone who’s around the house but not stuck in a makeup chair. In this case, my sister Tricia’s amazing boyfriend Jarret who is an excellent chef whipped up a delicious full Irish breakfast buffet for my family.”

Stefan’s advice is something I can get behind ‘

keep in mind that the “getting ready” pictures don’t actually have to be of you getting dressed. It’ll probably be before the bride’s side’s pictures, early in the morning so it feels a bit silly to pretend to be getting ready just for photos. We rushed over to the big house the Swedish family were staying at with all our fancy clothes and then didn’t bother putting them on and just had Katie take fun pictures of us all hanging out, making ourselves Swedish breakfast—which is lots of coffee and cheese and butter on brown bread.’

Kat and Stefan opted for a first look, which you all know I’m a fan of. Stefan was dubious when he saw the rain spilling out of the sky. But I was confident it would pass. After an intimate first look amongst the trees and hilarious gift exchange, the weather was on our side. We headed for some more portraits out on the lake. Following this, the couple went their separate ways for final sprucing. They were reunited at the top of the alter and it was nothing short of magical!

Sage words from Stefan here to finish off my ramblings ‘Relax and enjoy the day. You spent so much time planning, now the day is here and you’re ready. Something will go wrong! But that’s ok—nobody remembers a perfect wedding. It’s the flaws that make things special. In our case, the bridal party walked up the aisle without the bride and only figured it out when Emma came running after them. They went back and found Kat out in the car, trying to find her detachable train 😂. By the time they all walked up the aisle a second time—with the bride this time—the church was already full of warmth and smiles and laughter. The ice was definitely broken and it was the liveliest, most entertaining marriage ceremony. People were already having a blast before they even got to the drinks reception.’